Before starting to make my own Winamp plugins, I tried compiling an existing plugin DLL from source-code in my current setup, thus testing if my setup was working. I used the Beginner Basic Plugin Guide as a starting point for my solution in Visual Studio 2012. That seemed to work.

I then compiled the resteless_dsp plugin, for which I found the source here: http://www.hartwork.org/doku.php?id=restless_winamp_plugin. This became problematic.

First the plugin compiled without error:

When I ran the plugin locally, it worked fine. But when I tried to run it on another system (a clean windows 7 virtual machine) I got strange results. The plugin would load (show-up in the list of plugins), but the title was replaced by random non ASCII characters. The file name looked ok though. Like this:

And when I tried to run the configuration it told me ” Error loading module “.

The problem boiled down to a wrong configuration (again) of Visual Studio. I was using Common Language support… Resolving this would imply installing extra software a the target PC and I didn’t want that. So I decided to go without CLR. 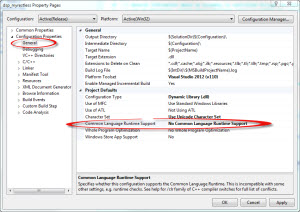 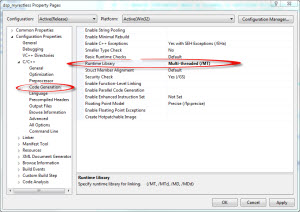 Now when I build I got a lot of errors:

I eliminated those by commenting out everything in the AssemblyInfo.cpp that raised an error. (leave #include “stdafx.h” un-commented)

That eventually did the trick. The code compiles ok and it works fine on other windows systems.

I hope this will help someone out there.

Note that when you merely overwrite the dll with a newer version, the ” Error loading module ” error won’t go away. Use the “uninstall plug-in” button (right of the configure button) first to remove old versions of the plugin before adding the new version. Failing to do so will complicate debugging.