Some time ago I decided to build myself a HTPC with satellite receiver. I ended up with this hardware:
Gigabyte Motherboard GA-MA785GT-UD3H , AMD PHENOM II X2 (processor), Cinergy S2 PCI HD (dvb card), Corsair DDR 1600Mhz 8-8-8-24 memory. I’m quite happy with it, but I like to share a few insights that I gained since then.

1. Don’t buy an AMD chipset.
I’m not saying AMD is bad. AMD actually is great. But the motherboard comes with an integrated AMD chipset including an integrated ATI video card ( 4600 ). This motherboard has all features to watch TV and Video, don’t get me wrong, but you won’t get any acceleration. Not in Windows that is. ATI is less open to the open source community and as I’m using XBMC to watch video, which uses FFMPEG to decode the video, all decoding will be done by the processor. The X2 ADM can cope only just. ( 55% CPU ). I ended up buying an NVIDIA ( GeForce GTX 260 ) which is affordable and gives me hardware acceleration in ( the latest beta ) of XBMC. As an added bonus I can play GTA with all settings at highest, 40+ fps.

2. Don’t buy Cinergy S2 PCI HD.
This card is stable as a rock and gives average to good picture quality. It’s compatible with DVBviewer Pro. But the remote control doesn’t work for me ( can’t figure out how to configure it ), but more troublesome: the card generates a high pitched sound ( like an old CRT television set ) when tuning to HD channels. It gives me a headache. I’m going to try and find myself a Hauppauge WinTV HVR-4000 00 DVB-S/-S2/-T/analog on of these days.

3. Software: DVBViever Pro
I learned there is a lot of DVB software, but it’s expensive, can’t handle plugins or is just crap. I stayed with DVBViewer Pro which is just perfect.

Some features I find very exiting are:

4. Software: XBMC
For watching movies and MPEG4 or DIVX mkv or avi files, I got hooked on XBMC. It is by far the sleekest home theater software out there and it’s FREE. It supports many skins and can play almost everything. One of the coolest features is the ability to change synchronization of audio and video while playing a movie!! They are in the process of incorporating DVB receivers too. XBMC will also lookup your movie files and tv-shows in a few online databases, returning fan art and titles. The library is very comprehensive.

PS: Windows 7 is working great on this system, but try to keep it clean. Do not install to many things, as it will inevitably make your computer slow.

Media centers I tried but abandoned.

A comparison of many many media centers (wikipedia) 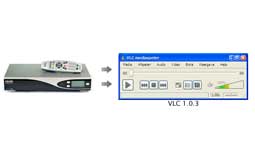 This ultra-small tutorial explains how to watch dreambox satellite TV on your PC using the latest version of VLC. If you have problems getting it to work try the comments section, maybe I can help.

Parameters in my setup (will be different in yours!):

VLC player should start playing whatever TV program that is currently playing on the dreambox.

NOTE: Change video.m3u to audio.pls to listen to the audio only.


TIP: Use the webinterface to change programs.

On Friday, December 11 a trojan horse got it’s way into my Windows.

It all started with AVAST trowing these warnings:

I told AVAST to delete ~TM1F1A.tmp, but avast apparently didn’t delete the file. Shortly after AVAST complained about a system file:

Then I looked at the running processes.

A process called CsimPlayer.exe was running and had two child processes svchost.exe attached to it.

Running a SHA Hash comparison between CsimPlayer.exe and the tmp-file confirmed that CsimPlayer.exe was indeed ~TM1F1A.tmp, the file AVAST identified as malware. The same CsimPlayer was added to the startup registry tree : HKEY_LOCAL_MACHINE\SOFTWARE\Microsoft\Windows\CurrentVersion\Run ( C:\\WINDOWS\\system32\\CsimPlayer.exe” )

The BAT file was dropped on my system at 11 december 23:08, moments before the ~temp files.

Another file called siszyd32.exe was dropped in the StartUp folder.

I still don’t know what it was and why Avast isn’t detecting it. I will keep you posted if more info is available.

At the mean time try following:

You’ve got this malware probably because java, flash or acrobat aren’t up to date. Older versions are insecure and potentially exposes your system to security threats! Scan your system with this online scanner.

Why does my computer just shut off without warning?

Well, It’s having some major failure (soft or hardware) and reboots. You will need to figure out what error was involved. For that, you should tell you computer not to reboot, but to show you the error. Here is how:

Now, next time your computer crashes, it will give you a “blue screen” telling you what’s wrong. Now.. sort of. Look here for a blue screen example:

Look for the STOP error, something like STOP 0x000000D1 , forget the numbers between brackets. Go to google and look for “STOP 0x000000D1”. It may give you clues about what is happening.

Also note the filename (in the screenshot it is gv3.sys). Look in Google what that file does. It may reveal clues to what piece of hardware or software is failing.

If you find for example that your sound card is the culprit, go to the manufacturer site (of the card) and download the latest drivers.

And a last (but not least) tip. Try to remember when the problem began and what software you installed just before that. Uninstall that software. It may return your system to normal again.