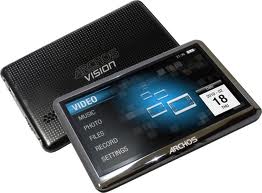 The simplest way to use mencoder is like this:
mencoder -o
This will encode input-file into a MPEG4 file with a variable video bitrate of 750kb/s and a constant MP3 audio bitrate of 128kb/s. The container is AVI. The name is output-file.

For the Archos, we want to add some extra options:
mencoder -o
This will encode a MPEG4 AVI, allowing 4 motion vectors per macroblock (slightly better quality), shape adaptive (fast) diamond with size 3 (fast encoding) and a variable bitrate of 750kb/s. We also scale/zoom the video so it fits the Archos 480×272 screen nicely. Aspect ratio is preserved by omitting the height.