I have been searching for a tool that can record in stereo on the Note 2 from Samsung. This seems to be a rare feature giving developers some difficulties to efficiently implement. Especially because the Note 2 uses two separate microphones for stereo recordings.

The Samsung Note 2 (and maybe also the S3, I’m not sure) has two microphones, one on the front and another on the back. If you record video, the source of the sound is comming from both these microphones, so giving you stereo sound. But most (if not all) of sound recording apps will allow you to select one of them, both not both. Even though they advertise to be able to record in stereo, they will not allow you to bind the front mic to the right channel and the back mic to the left. 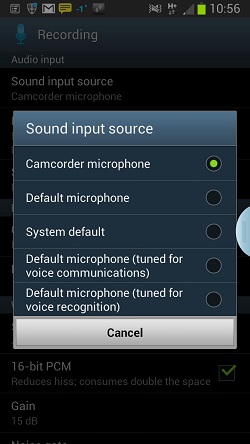 By using the “Sound input source” in the settings and selecting Camcorder microphone, the app will actually record in stereo using both microphones of your phone. The pro version gives you some extra features, worthwhile. You can choose bitrate and filetype, though mp3 is not supported — it uses AAC for compressed files.